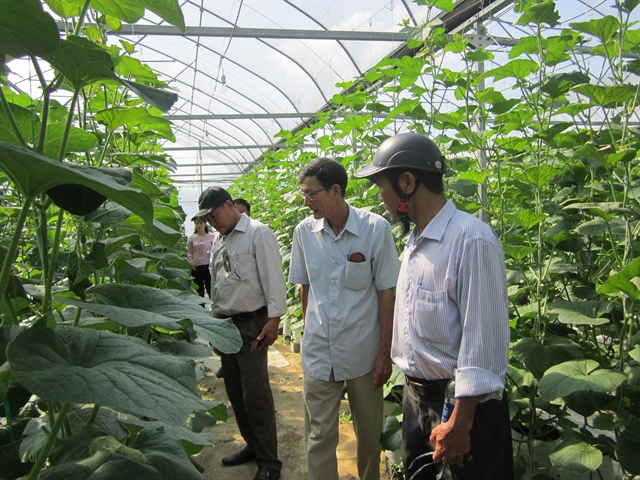 A hi-tech farming project in the central province of Thừa Thiên Huế. — Photo khuyennonghue.org.vn
THỪA THIÊN HUẾ The central province of Thừa Thiên Huế has set a target of luring 20 domestic and foreign-invested projects with a total investment capital of about VNĐ10 trillion (US$429.2 million) by the end of this year.
Top priority will be given to Industry 4.0 areas including IT, hi-tech farming, new material production and biological technology, following the province’s investment promotion plan in 2020 issued on Thursday by the provincial People’s Committee.
Other fields in focus are agricultural processing, infrastructure development of economic and industrial zones and non-tariff areas, processing and manufacturing, supporting industries, real estate, as well as tourism, healthcare, education-training and others in value chains in Southeast Asia and Asia-Pacific.
Further attention will be paid to calling for investment from traditional markets such as South Korea, Singapore, Thailand, Japan, Hong Kong, the US, Europe, and countries benefiting from Việt Nam’s entry to bilateral and multilateral free trade agreements.
To this end, the province will focus on building a database on investment promotion activities, accelerating the implementation of promotion campaigns in order to better advertise its investment environment, policies and investment opportunities.
Preparing adequate land resources for key projects, speeding up administrative reforms and facilitating investors in developing their projects in the locality will be also included, according to the plan.
As of March 2020, the province was home to 119 valid foreign-invested projects, worth more than $3.86 billion, ranking 23rd among 64 localities in terms of foreign investment attraction, statistics from the Foreign Investment Agency revealed.
The province soared from 30th in 2018 to 20th in 2019 in the 2019 Provincial Competitiveness Index (PCI) released by the Việt Nam Chamber of Commerce and Industry this week.
Both law and order and labour training criteria achieved the highest score so far, at 7.35. Other sub-indices, namely transparency, time costs, informal charges, policy bias and proactivity were considerably improved.— VNS
Source:VietnamNews